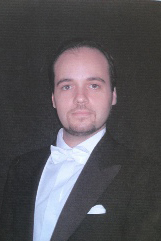 Apostolos Kallos is born in Rhodes (Greece) in 1974.

He started with piano and voice lessons at the National Conservatory of Athens and continued his studies at Mozarteum University in Salzburg (piano soloist section by Prof. Christoph Lieske, piano accompaniment for singers by Hartmut Höll, Anthony Spiri, D. Sulzen and choir conducting by Prof. Karl Kamper).

He has a long experience as accompanist for voice classes at the National Conservatory of Athens, at Mozarteum, at the Regional Theater and also at the Bachchor of Salzburg. He participated as member to various choirs and vocal ensembles (Choir of the Regional Theater Salzburg, Bachchor and member of the Comedian Harmonists Salzburg).

From 2005 till 2008 he was Deputy Choir Conductor as well as responsible for the children choir at the opera in Frankfurt am Main. Since 2008 he teaches piano, voice (incl. voice training for children), piano accompaniment at the Music Schools of Land of Carinthia and at the Carinthian Music Academy. Since 2011 he regularly works with the mezzo-soprano Bernarda Fink and since 2013 he is Musical Director of the Singschule Carinthia, in cooperation with the Municipal Theater of Klagenfurt.

Concerts as piano accompanist with various singers in Germany, England, Greece and Austria.

His repertoire includes more than 60 opera works as well as a vast knowledge of Lied and Oratorio, chamber music and concert choir literature.