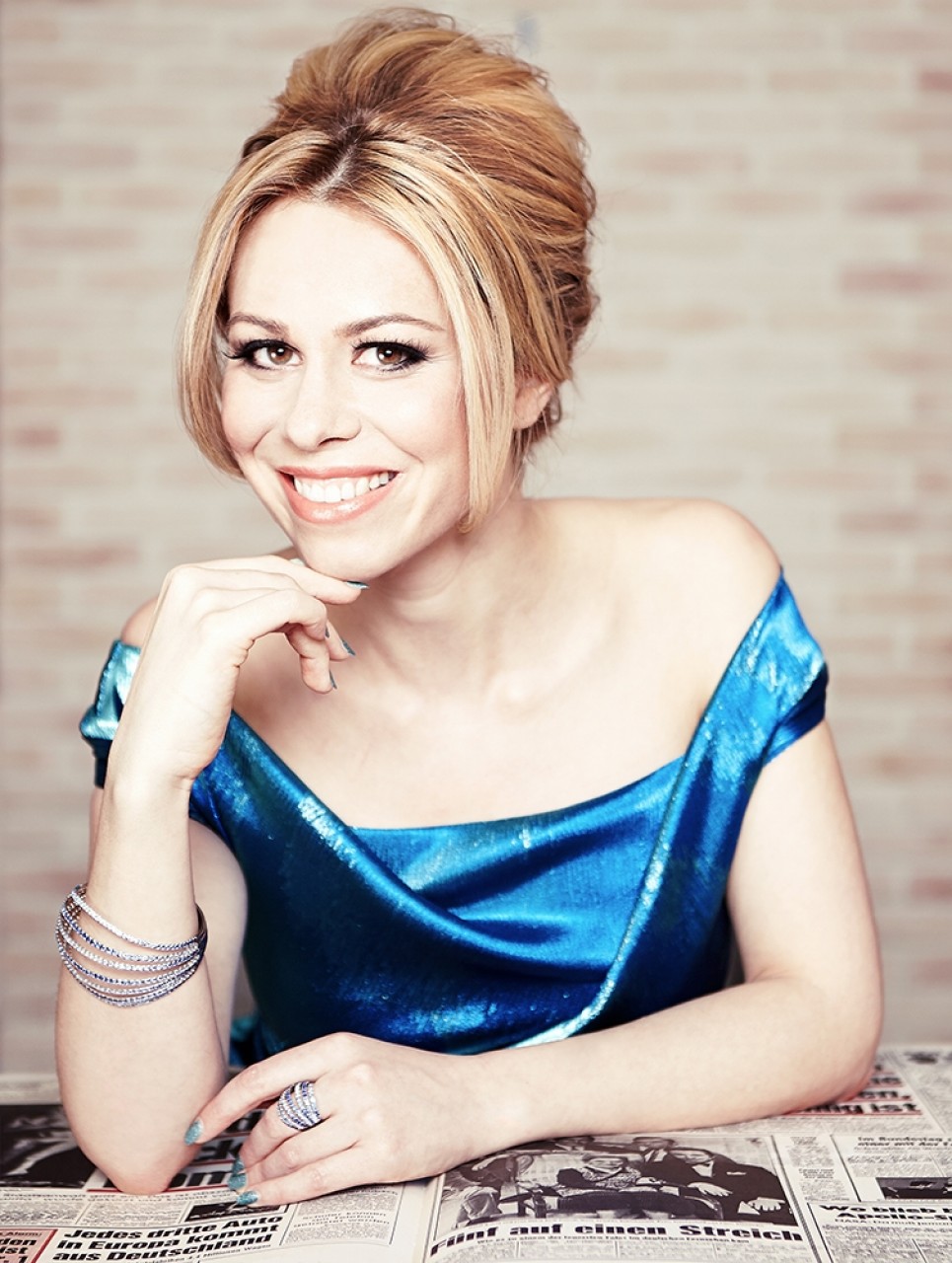 Praised for her vocal abilities – („Her coloratura satiny and clean, and blessedly unperky“/THE NEW YORK TIMES) –  as well as for her acting skills and physical flexibility („she paired a wonderful coloratura solo with amazingly effortless full splits – without going even slightly off key“/Herald Tribune) and comic talent („An all-around comic spitfire dashing off high-notes with plenty of deceptive ease“/Chicago Daily Herald) the native AUSTRIAN opera singer Daniela Fally has established herself as one of the leading coloratura sopranos of her generation.

Called „THE Adele of the 21st century“ the born Viennese is the perfect combination of a singing actress or an acting singer. She was a dancer, an actress, a journalist and a musical theatre performer before she became an opera singer, and her goal for opera was always to combine the various genre skills to make opera as exciting, real and touching as possible.

Since 14 years she is now singing at Vienna State Opera (since 10 years as a member of the soloist ensemble) and she has constantly been invited as a guest to many of the most renown opera houses worldwide. She sang repeatedly at La Scala Milan, the Semperoper Dresden, the Lyric Opera Chicago, the Bavarian State Opera Munich, at the Opéra National in Paris (Bastille), the Salzburg Summer and Easter Festival and the Bregenz and Mörbisch Festival, the opera festival Munich, the International „Maifestspiele Wiesbaden“, the State Opera Hamburg, the Deutsche Oper Berlin, the Theater an der Wien, the Kammeroper Vienna, the Volksoper Vienna, in Zürich, Düsseldorf, Strassburg, Toulon, Darmstadt, Leipzig, Stuttgart, Liège, Liepaja and many opera houses more. Concerts and oprea productions also braught her to Japan, Dubai, China, Kasachstan and Russia.

She performed in over 20 concert- and Lied-evenings in Vienna Musikverein, in more than 10 in Vienna Concert House, furtheremore at the Lucerne Festival, the Musikverein Graz and Klagenfurt, the Arena Salzburg, the Hamburg Musikhalle, the Kongress Innsbruck and many more. Since 7 years she has been invited repeatedly to the Grafenegg Music Festival.

In her 24 years of stage career – she first started as an actress and musical theater performer, then later as an opera singer – she sang more than 750 performances (concerts not included) in 60 different roles in 64 different productions at 60 different opera houses and festivals. Until now she opened 46 new productions internationally.

Her repertoire includes opera and operetta roles through all the centuries, styles (yes, even chanson and pop songs) including „Old music“ and the contemporary stage works of today, as well as numerous Lieder, Missas, Symphonies and over 15 Oratorios.

She was sheduled to open the Vienna Opera Ball in 2018 but unfortunately got sick. She was part of the New Years Concert 2018 performing in the famous intermission program, broadcast to 92 countries, watched by over 50 million viewers worldwide.
Furthermore she was and is writing for various magazines and newspapers, will soon have her debut as stage director and is a well known host and guest of Austrian TV Shows, and jury member.
As a Vocal coach she works privately in Vienna, furthermore at the „Richard Wagner Conservatory Vienna“ and gives regularly Masterclasses the Vienna State Opera „Academy for young singers“. She is permanently invited to give masterclasses at various occasions and just adores working with young singers and performers.
She herself studied with Prof. Helena Lazarska (solo singing, opera) and Prof. Edith Mathis (Lied and Oratorio), she studied musical theatre performance at the University of Music and Performing Arts Vienna and also journalism, musical and theatrical sciences and publicity and communication sciences at the University Vienna, and finished her studies at the University of Music and Performing Arts Vienna with distinction. She was awarded the „Würdigungspreis“ (price of honor) of the University of Music and Performing Arts for her extraordinary achievements during her study time.
Soon after having started her career she was awarded the „Eberhard-Wächter-Medaille“ (an Austrian medal of honor for extraordinary achievements in a stage role) for her interpretation of Adele in „Die Fledermaus“ at Vienna Opera houses, the role that she sang until now around 100 times in 10 different productions all around the world including Vienna, Milan and Chicago. She is also very famous for her interpretation of Zerbinetta in „Ariadne auf Naxos“ (around 80 performances in 14 different productions), recently 2019 at Semperoper Dresden under the baton of Christian Thielemann and with Franz Welser-Möst and his Cleveland Orchestra and as well at La Scala Milan.