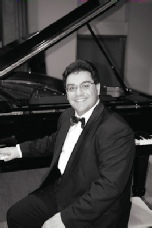 Dimitrios Syringelas was born in Larissa (Greece) in 1976.

He studied Piano by  Prof. Karl-Heinz Kämmerling and Prof. Rolf Plagge at the piano soloists section of the Mozarteum University in Salzburg as well as Music Theory and Musicology at the “Aristotle“ University of Thessaloniki (Greece).
Master classes among others with Prof. Roberto Szidon, Bernard Ringeisen, Prof. Karl-Heinz Kämmerling, Domna Evnouhidou, Aris Garoufallis, Vassilia Efstathiadou and Nikolas Astrinidis.
At present he attends the Doctorate Studies at the Mozarteum University (Prof. Dr. Joachim Brügge). His Doctor‘s Thesis is focused on the french piano music between 1850-1930.

He combines regular educational activity [a.o. at the Musikum Salzburg since 1998 or at the Mozarteum University (2006-2010)] with both master classes [Austrian Master Classes, ÖBV, Rencontres musicales des Monts Dore (France)] as well as Juror’s activities (youth piano competition “Prima la Musica” in Salzburg, Wendl & Lung) and is actively involved in organising educational institutes [Head of Department for Music Theory in Salzburg (2001-2009), Administrative Director MS Salzburg Stadt III / Musikum Salzburg Stadt (2003-2006), National speaker of the Heads of Dept. for Music Theory in Austria, President of the committee and co-author of the new curriculum for Music Theory, applied to all music schools in Austria and South Tirol (2004-2006), Member of the Austrian Section of the European Piano Teachers Association (EPTA)].

In 1999 he won the Academy of Athens Award, handed over to him by His Excellency The President of the Hellenic Republic, as the most promising young artist. He is also active concert pianist (Solo, chamber music, concerts with various orchestras as well as, in Piano duo, since 2008, with Mag. Anja Zech) and has given concerts in several European countries.

His students have been many times distinguished at youth competitions and examinations in Austria and have been admitted to European Universities.

He speaks in German, French, Greek and English.